NOTICE:  While this is a family friendly website, there are occasions that it's necessary to delve into some adult-related themes from time to time.  This is one of those times.  If you're a child or someone with an inability to deal with important topics, either get permission from a parent or leave this Blog entry now.  This is your only warning.

Over the past few years, my Blog has started to include some articles that crossover into what some people call "Politics".  And I can appreciate that, as most of the people searching for and coming here are looking to answer very specific questions about God, the Bible & Christianity as a whole.

In all of my years teaching about God, discipleship & the Bible in general, I've come to discover something that's rather insidious in nature.  For the most part I've bitten my tongue (or in this case, tied my hands behind my back), because I've been trying to be as non-political as possible.  The problem, is that no matter how well I plan, no matter how thoughtful I am of the words I choose to use, there will always be a group of people out there who will go out of their way to find something to be offended at.  For the most part I don't care.  If you look carefully at some of the things that Jesus has said, you'll find that He has said way more insulting and way more offensive things than I have (and rightly so!).

But today I come to you to talk about a bill (2 actually) that were recently passed by BOTH the U.S. House and the U.S. Senate.  I'm going to comment on it for 2 reasons.  The first, is you've probably never heard about it.  The second, is that I am confident that the thing I'm most concerned about - the thing I'm going to tell you about today - will actually come to pass.

The bills that were passed are referred to as the "Stop Enabling Sex Traffickers Act" (SESTA) or "Fight Online Sex Trafficking Act" (FOSTA).  They're acts that were passed in order to hold website operators DIRECTLY RESPONSIBLE to anyone who has been hurt as a result of being a victim of sex trafficking.  Briefly, the reason that these acts came before Congress, is because a lawsuit from someone trying to sue a website operator for allowing people to use the site in a way that caused them harm was put before the United States Supreme Court.  As I understand it, the case was rejected and handed over to Congress to deal with.  They did.

So what's the problem with this Act?  You would think I'd be thrilled!  And don't get me wrong, I am thrilled.  Sex trafficking is awful!  I can barely imagine what it must be like for a woman, or even worse than that, a young girl, to be sold into sex-slavery or be forcibly used by someone in order for them to make money.  So the act itself I am for, but the consequences of that act.... I believe it's just a matter of time before those consequences are made manifest.

Allow me to explain:

There were 2 widely known websites who weren't INVOLVED in the sex trafficking in a direct manner, meaning, the owners of the site weren't actively taking small girls, handcuffing them to steel pipes and forcing them to have sex with adult men.  The sites were being abused and used for purposes other than what they were designed for.

The 2 sites were backpage.com and craigslist.org.

Within DAYS of passing this act, backpage was shut down by the Federal Government for a whole host of non-compliance issues.  As a matter of fact, here is the image currently being displayed there at this time of this writing: 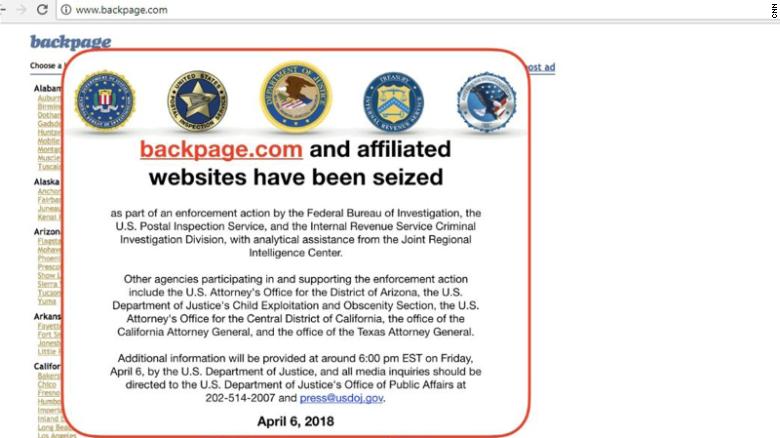 Craigslist on the other hand, being much larger and the recipient of far more web traffic, took a much more aggressive and hands on approach to the act.  Craigslist completely shut down the areas of their site that were being abused THE MOST.  I say "the most", because even now there are people using other parts of that site to keep themselves "in business".

Here is the message that Craigslist put online, in place of their "personals" section:

You would think that Congress and the public at large would be thrilled about the very direct and very finite results of this.  And you'd be right.

As I said in one of my opening statements, I believe there is in fact something insidious in nature that will come to pass as a result to this act COMBINED WITH the actions of shutting down Backpage and from Craigslist shutting down their personals section.

I am convinced in every way possible that this is going to result in:

And I believe that it's also ALREADY begun.  No, the news hasn't picked up on it yet, no, it's not being reported anywhere, but I can't imagine that these sick and twisted people have allowed their lusts to go unabated for more than a month!

If you have small children, KEEP THEM CLOSE!
If you go out to social functions in bad neighborhoods, GO IN LARGE NUMBERS!
If you have an elderly, injured, disabled or comatose relative - KEEP YOUR EYES OPEN!

Believe me when I tell you that I realize this post seems odd or even confusing to some of you.  I'm just sharing what I feel has been put on my heart to share.  So please try to understand that I'm not trying to create a panic, I'm merely issuing what I believe to be a serious warning.  Do as you likewise feel lead to do.

Can anyone among you say it's a bad thing to keep a closer eye on your loved ones?

In closing, I'm not saying that Craigslist and Backpage should go back to what they were doing, NOT AT ALL.  What I AM SAYING, is that these sick perverts have had their "status quo" disrupted and are going to need to keep doing whatever it takes to satisfy their lusts.  The saddest part, is that the Progressives believe the only problem with these acts is a loss of freedom of speech!  Who are they kidding?  Eliminating both the 1st and 2nd amendments to the U.S. Constitution has become a full time job for them over the past 9 years or so.

The Bible teaches us that "with God, all things are possible", but these people aren't "with" God, they're getting their instructions from somewhere else.  Keep preaching the truth, keep reading your Bible, keep the faith & continue to evangelize until you have no more breath to give.  That's the best any of us can do.  And don't forget to look up when you pray!  Please come soon Lord!

I welcome any comments or additions!
Posted by Pastor Keith at 7:30 PM No comments:

I'm having technical problems with the main But is it Biblical? website, so I have redirected you here instead. You should be able to find everything that was there, here as well.
I plan to get the main site back up and running as soon as I can find the time.

Pastor Keith
I'm a "Biblical Christian" Pastor. I don't subscribe to any religion, instead I believe the inerrant Word of God. --The Bible!

Click HERE to read about how I was "converted"...

Being human, I am prone to mis-speak or make a typo from time to time. Please be kind enough to alert me should you think I have done either and I will readily fix it!